Remembrance Sunday at Amesbury School was marked with the unveiling of a blue plaque that represents the relationship between the school and Field Marshal Bernard Law Montgomery (Monty).

The plaque was awarded by the Haslemere society, and it recognises how Monty lived at Amesbury school during the Second World War, using rooms to plan the D-Day landings in 1944.

One of our pupils, Stanley, was at the unveiling. Stanley’s great grandfather ‘Jack’ took part in the D-Day landings and the Battle of Arnhem and was captured. Jack managed to escape and was awarded a military cross for his service. His discharge papers were signed by Field Marshal Montgomery.

The unveiling was followed by a remembrance service in memory of the lives that have been lost in war. 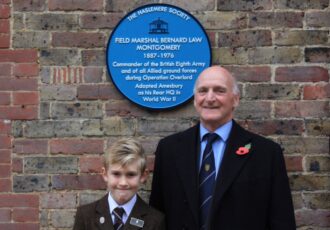